A New Zealand woman says she has tested positive for Covid-19 after flying from Auckland to Sydney just over a week ago.

The woman – who didn’t want to be named – took off on July 20 aboard Air NZ flight NZ103 and went straight into quarantine in Sydney.

Australian authorities then tested her on her second day in quarantine before her results came back positive for Covid-19 on July 26.

Her positive result comes after another passenger was late last night also revealed to have tested positive to Covid-19 after flying from Auckland to Sydney on July 6.

Passengers on board that flight seated in rows 22 through to 26 were being contacted by health officials both here and across the Tasman.

In Auckland, the regional public health service was following up with household contacts and other contacts as appropriate, Stuff reported.

There was a suspicion the person may have been a previously unconfirmed case from March, and that was responsible for the positive test result.

The woman said she assumed Australian authorities would have automatically alerted New Zealand health officials to her positive test.

However, after reading about the Korean traveller who tested positive to Covid-19 after returning from New Zealand to South Korea earlier this month, the woman decided to ring New Zealand’s health hotline to make sure.

She discovered authorities were unaware of her case.

You ARE special. You were born in New Zealand. That alone makes you rare, in this world of 7.8 billion.

At some stage, for any of a thousand reasons, you left your home country. Perhaps for adventure, or love, for opportunities to study, or work, or live in a bigger, brighter city. Perhaps you were bored here, or your life wasn’t what you wanted it to be. Or maybe you didn’t have a choice, or the choice was not yours to make.

You are welcome to come home. You are special. But the lady behind the till at the supermarket? Her child has asthma, and she lives in fear of catching Covid-19 and taking it home to her child, who is vulnerable. And the nurse who will be testing you? Her husband has cancer, and is undergoing chemotherapy. His immune system is shot, and Covid-19 would be fatal, and so they are not living together. The assistant at the liquor store? He doesn’t even know, but he is immune compromised, and not only is he at risk should he catch Covid-19, but so is his newborn baby.

So please, come home. You are special. But you’re not MORE special. Not more than the supermarket worker, not more than the nurse, not more than the liquor store assistant. Not more than any single person in New Zealand. So please, come home if you need to, want to, or have to. But DON’T think you’re “more special”. That the rules don’t apply to you. That you should be entitled to compassionate leave to attend a relative’s funeral or visit a sick grandmother. Because we, too, have been unable to do those things. We, too, have felt that pain. But we are not MORE special than the rest of our team of 5 million, and so we have done our bit to protect our beautiful country, and all the special people in it. And now it’s your turn.

Come home, by all means. Join our team of 5 million, we welcome you back. But please, obey the rules. Two weeks in a four star hotel with meals provided is not punishment. It is the price you need to pay for calling New Zealand home. To be able to come to our safe haven, and live with little restrictions. To enjoy, it could be argued, the best quality of life offered by any country in the world right now.

And to those (few) of you who can’t obey the rules, or think you’re MORE special – then perhaps this is no longer the place for you. You do not belong in our team of 5 million, and you are not welcome. We have worked too hard, together, with too much cost, to risk it all on the likes of you.

The Greens Chloe Swarbrick, a radical Marxist, is standing in Auckland Central only as a means to collect party votes. Citizens who vote for Chloe are risking bringing a swag of like Marxists into parliament if the count gets above 5%. Keep the Greens below the threshold. #nzpol pic.twitter.com/MzQ6aC8fia

How dare you announce this for political points and sit back on full pay for 3months claiming its too tricky to change the law.

If the real reason Winston Peters’ friends got a taxpayer-funded trip to Antarctica was philanthropy, the Government should release the paper trail to back it up. 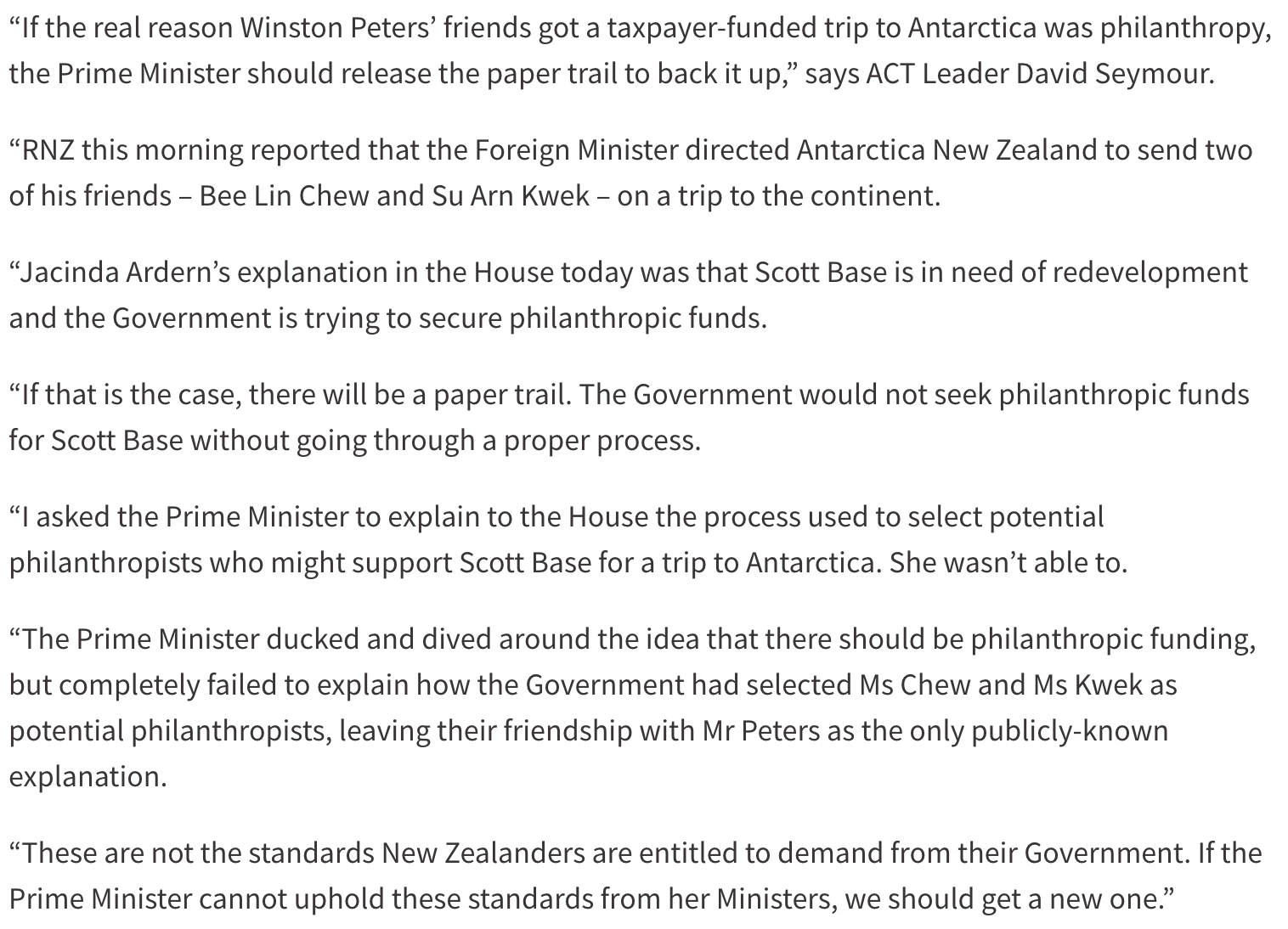 The Government has sold at least 146 state homes worth more than $30m since late 2017, despite Labour promising to stop the sale of state houses if elected to government.

In the lead up to the 2017 election Labour said if elected it would immediately end the sale of state houses.

The statement said the Labour-led Government had “cancelled the sell-off of state houses, fulfilling another of its first 100 day promises”.

Twyford said it was the end of “large-scale” state housing sell-offs.

However, towards the bottom of the statement Twyford said it would still sell houses that were no longer fit for purpose.

While it made sense for the Government to sell housing stock that may not be fit for purpose or not geographically suited to demand, it had not done what it said it would and stop the sale of state houses, he said.

“What you say today is going to come back to bite you tomorrow if you’re not absolutely correct to the letter.

“This whole failure to deliver is being used against them.”

Kāinga Ora government relations manager Rachel Kelly said as a general rule a house would not be sold when it became vacant.

However, in some circumstances selling a property would be considered, she said.

That included when a property was too old and expensive to maintain, no longer met tenants’ needs, or was not in the right place to meet demand, she said.

When Kāinga Ora sold a house the money received was reinvested in the redevelopment of existing property or in buying new properties that would meet the needs of tenants, she said.

Megan Woods took over from Phil Twyford as Housing Minister in June.

The Kāinga Ora property portfolio was valued at the end of each financial year. As at June 30, 2019 it was worth $28.6 billion, she said.

The total number of properties managed by Kāinga Ora was 65,769 as at December 31.

Housing Minister Megan Woods did not respond to questions.

That equates to 1398 houses sold and 1531 built in National’s last three full financial years in power.

She said the party was wrong to sell and convert more state houses than it built.

However, the current Government failed to deliver on original targets set out in its KiwiBuild housing programme, which was meant to build 100,000 houses over 10 years.

To date fewer than 400 have been completed.