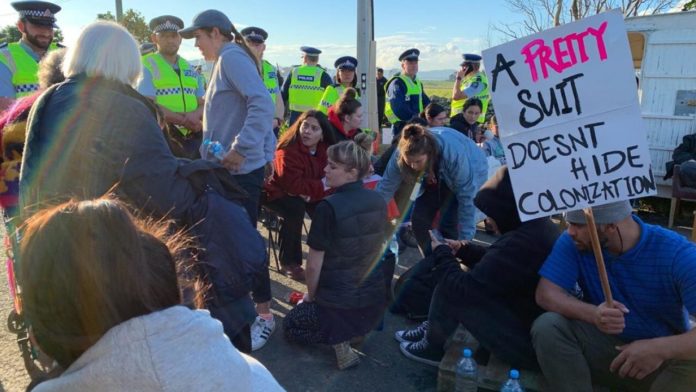 A reader drew my attention to an interesting point of view about Ihumatao that she read on a Facebook page yesterday.

It had the headline: Two sides to every story.

I whakapapa to the Whenua at Ihumatao. I have whanau living in the papakainga, and whanau buried in the urupa. My grandfather’s photo and those of many more tupuna hang in Makarau Marae.

I do not support SOUL.

I support the kaumatua who have spent decades fighting for iwi rights to that land and those waterways and fighting to protect wahi tapu. Kaumatua who have done so tirelessly, not through garnering limelight in social & other media, but through the court and post treaty negotiations framework and through clear and measurable opposition to foreshore and seabed issues. Who when after being knocked back again and again by the legal system in this country in their opposition to urban development on the Wallace Block, have achieved an absolute watershed agreement where the legal owners of the land are returning 1/4 of that land to Maori, along with houses within the other 3/4 that will allow iwi to live on that land, to own homes at a value preferential to purchasing elsewhere on the Auckland market, whanau who have never had the opportunity to own homes before let alone the opportunity to live in the local papakainga where the home sites are available to the lucky few.

So please read that again people, LAND THAT WAS HISTORICALLY CONFISCATED FROM MANA WHENUA BY THE CROWN IN THE 1860s IS GOING TO BE RETURNED TO MANA WHENUA. And yes – a quarter is not ALL the land. But under the legal framework that like it or not has been agreed to, anyone who has ever been involved in any post treaty settlement will tell you, we are not going to get everything back.

There has to be a point at which we as a people stop perpetuating the victim mentalityand instead put our energies & focus into doing what we can with what is NOW in our power.

I do not support those that have been putting their energies into perpetuating Maori as continuing to be oppressed on that Whenua, who have presented a slick, emotive and captivating campaign, so alluring that people are blindly liking and sharing in their droves, changing their Facebook and Instagram profiles like moths to a flame, spurring people to seek petition support without seeking out all the information. A campaign so well woven visually and lyrically that it would have the untrained eye and ear think that houses are going to be built on w?hi tapu sites on land that is now council-owned, rather than the actual site on neighbouring farmland that is flanked by factories.

A campaign so misleading that it has left my babies, tamariki who whakapapa to that whenua, confused and questioning why their 13 and 15-year-old friends are changing their social media profiles like it’s some cool group to be a part of. A campaign so fashionable that it’s trending on Twitter, spoon-feeding people misinformation.

A campaign so click-baitable that various groups and political parties are using it as a soap-box to promote their own agendas. What have these people been doing in the last 150 years whilst the whenua has been farmland and the kaumatua have been neck-deep in struggle with the legal system and post treaty negotiations reality?

Then there are those motivated to go to the land to support the cause, to “stand”. But I challenge those people to truly question, what are they standing for? And yes, people have a right to freedom of speech and peaceful protest, but the problem is when a one-sided message goes out to the misinformed masses, there’s always a risk a renegade person or subgroup of supporters will push the boundaries of peace. To me that’s deliberately running the risk of innocent people getting hurt. And it puts at risk whanau who live in that papakainga that don’t subscribe to SOUL’s campaign.

And yes, those whanau do exist. And honestly, if I see another selfie of someone posing with a line of police behind them doing their jobs, well… talk about turning this into utter modern era self-promotion ridiculousness!

So contrary to what the majority of mass media to this point, widespread social media and the SOUL group would have people believe, this isn’t a generalised dispute open to the public. This isn’t something the Crown should get involved in. This is a dispute between two interested parties that have gone different ways about achieving ultimately the same thing. One who after turning over all other avenues has achieved legal return of confiscated lands in perpetuity, vs another who is pushing up against a legal brick wall… for what?

Yes, this will go down in history and I for one will be educating my children so they don’t carry myths into generations to come.