GEOFF BOOTH NZ Politics & Stuff
@GeoffsNZViews
· Oct 17
This last yr WaikatoDHB-Mental Health has been under fire for releasing vulnerable patients who then died. Yesterday & today wards were emptied, vulnerable patients thrown out regardless of condition & clinitions & staff ousted Why? So this P.O.S could do a photo shoot!

Labour's failure to deliver on its police promise is just the latest in a long line of failures. 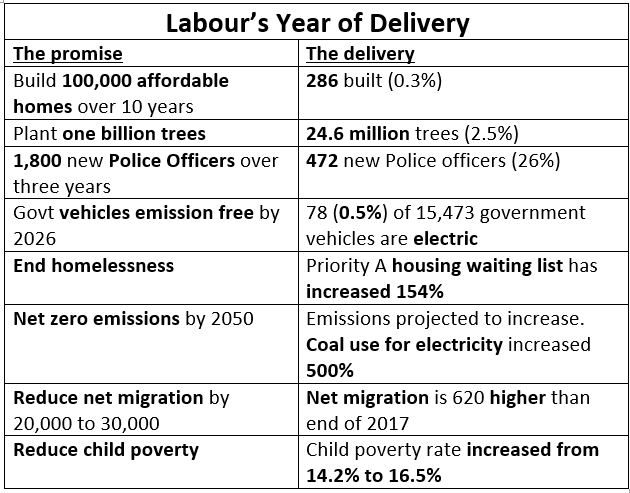 This story was originally published by the New Zealand Listener and is republished with permission.

A new book about Europeans kept as slaves by Māori between the 1790s and 1880s challenges the theme of “colonisation and exploitation that is central to postcolonial writing”.

They were nearly home, well within sight of land, when a southerly gale drove the barque Harriet, carrying Elizabeth Guard, her husband, Jacky, and two young children on to the Taranaki coast. Remarkably, everyone on board made it to shore. Their luck, however, was about to run out.

In 1834, the shipwrecked survivors of the Harriet were attacked by a group of Ngāti Ruanui and other Taranaki Māori. A number of crew members were killed, including Guard’s brother. Guard herself, her family and other crew members were taken captive. After two weeks, Jacky and several other men were released on the understanding they would return with a cask of gunpowder as ransom for the rest of the party.

READ MORE:
* Tuia 250: the return of the ‘death ship’
* What’s in a name? How ‘Pākehā’ became corrupted
* Pivotal piece of colonial history explored in moving and sensitive way

Several days later, Guard and her baby daughter were given up in exchange for the rangatira Oaoiti, who had been captured and brutally treated on board the Alligator.

The capture and eventual release of Guard and her children attracted huge attention. In lurid detail, the Sydney Herald described Guard as being stripped naked and dragged into a hut.

Her husband claimed she had been taken as a “slave wife”, even though other accounts suggest that, after the initial affray, she was treated well and protected by Oaoiti, who took Elizabeth as his wife or lover. Unfortunately, Guard’s version of events is absent, her story reliant on reports by others, including one suggesting she later gave birth to twins fathered by Oaoiti.

The rescue itself was criticised for its excessive use of force against Māori.

Related articles:
* Why we need to open up about past Māori and Pākehā conflict
* Inglorious Dastards: Rangiaowhia raid and the ‘great war for New Zealand’

It is retold again in his new book, Pakeha Slaves, Maori Masters, the mostly forgotten story, he writes, of the Europeans who lived and sometimes died as slaves in tribal New Zealand between the 1790s and 1880s.

SUPPLIED/LISTENER/BAUER MEDIA
A shadow portrait of Elizabeth Guard, left, and a news cutting of Caroline Perrett, who was recognised after being kidnapped as a child.

“I’ve always had this fascination with people who had crossed cultures,” he says.

“One of my ancestors was a Portuguese sailor, a shipwreck survivor who washed up at my ancestral village in Samoa in the 1700s, so I have had this long-term interest in people who formed new identities and became part of these new cultures.”

In his new book, he walks readers through the short but little-known history of Pākehā taken prisoner or enslaved by Māori. In some cases, this was done as an act of revenge for serious breaches of Māori tikanga.

In 1874, eight-year-old Caroline Perrett was kidnapped by Māori in Taranaki after her father dug up Māori graves and a local Māori child had also been kidnapped by Europeans (Perrett was recognised some 50 years later while working alongside her adopted hapū).

Utu similarly motivated the attack on the London-bound Boyd by Ngāti Pou and Ngāti Uru in 1809. A leading rangatira, accused of stealing pewter spoons, had been flogged and robbed before being sent back naked to his people at Whangaroa. In the ensuing attack, 60 passengers and crew were killed and nine survivors enslaved.

But most Europeans taken captive by Māori were runaway seamen – a motley crew of stowaways, castaways, mutineers and escaped convicts from Australia – or shipwrecked mariners. Some of these would have been killed.

Others would have been put though the “terrifying rituals”, writes Bentley, of whakataurekareka/enslavement such as being stripped, beaten, forcibly tattooed or marched over long distances – rites of passage, says Bentley, in which captives passed from the status of herehere/prisoners to that of taurekareka/slaves.

From here, the treatment of those taken captive varied, often depending on their status and usefulness to their captors.

Some, particularly those considered of lowly status or who showed little respect for Māori rangatira or tohunga, were treated harshly, many living under the constant threat of death at the apparent whim of their masters.

Others gradually assimilated into their communities, their identity restored, even their personal names reinstated.

“If you could contribute in some way as an artisan, a fighting man, someone with agricultural knowledge or technical skills, you very quickly acquired status. So, if you had ambition and wanted to improve your conditions, it seems you had the opportunity to do so, but if you were a humble person, you were treated as a slave for life.”

The mistreatment of enslaved castaways diminished as rangatira realised they could be exchanged for muskets (this was the time of the Musket Wars), gunpowder, axes or hard cash.

When the American schooner Cossack was wrecked near Hokianga in 1823, local Māori provided Captain Dix and his crew with good food and housing before they were escorted through neighbouring rohe and sold to Anglican missionaries and ships’ captains.

Some captives were imprisoned only briefly. Others became bound to iwi through marriage, many gaining respect as interpreters, warriors, trade negotiators or even “Pākehā rangatira”, often enjoying a life far better than the harsh treatment on board ships.

Jack Marmon, who lived with a Te Hikutu hapū on the Kerikeri River between 1817 and 1820, described living quietly with his wives, fishing, hunting, boatbuilding “and when all things failed had my pipe to fall back upon”.

These captives fall into Bentley’s category of “chattel slaves” – they were the personal property of their captors, placed within a hierarchy similar to that used for Māori slaves or war captives.

(As Hazel Petrie wrote in her 2015 book Outcasts of the Gods?, the loose labelling of Māori war captives as “slaves” conflated two quite different institutions “and led to those captives being perceived in much the same way as African slaves in the Americas rather than as the prisoners in intertribal warfare that they almost always were”.)

Others, writes Bentley, were tributary vassals or demi-slaves – the missionaries, shore-based whalers, sealers, sawyers, flax traders and entrepreneurs who were welcomed into Māori communities and, as long as they obeyed Māori law and paid regular tribute, allowed to live on Māori land and use the resources, whether it be timber, whales, seals or people’s souls.

“They were given access to resources and protection and got on very well with Maori – as long as they contributed. If not, then they were plundered.”

THE CONTINUUM OF SLAVERY

So, were they slaves? Bentley agrees slavery/ taurekareka is a slippery term, “But the act of stripping somebody indicates you are enslaved. [For chattel slaves], your identity has been removed, your ship or whaling station has been plundered or your boat confiscated and you are going to be worked hard and, in the case of war captives, put through rituals of whakataurekareka, which could be quite brutal physically and psychologically.”

But whether they lived as chattel slaves within Māori communities or semi-independently as tributary vassals on tribal lands, he writes, is immaterial.

“In New Zealand before the Treaty of Waitangi in 1840 and in Maori-dominated regions thereafter, they were subject to the control of local rangatira. Dependent upon Maori for protection in return for service or tribute, they all had a place on the Māori continuum of slavery.”

Bishop Selwyn, for example, was one of about 14 missionaries “enslaved” when he was detained and imprisoned in 1861 by Māori in retribution for the killing of family members and the destruction of homes and crops by British and colonial troops.

“Some were stripped and [their possessions] plundered while mission stations were burnt but they don’t mention this in their journals or they skim over it very lightly.”

SUPPLIED/LISTENER/BAUER MEDIA
Bishop Selwyn was “enslaved” in 1861, according to Bentley.

The record is skewed in other ways.

For this book, Bentley researched published histories by hapū and iwi historians and writings by Māori scholars, but the most frequently referenced sources are the journals, letters and logs of ships’ captains, the captivity narratives by returned “slaves” and media accounts of the day.

Many of these veered towards the sensational. Tales of helpless white women in the hands of “savages” were in high demand in the 19th century as British and American readers seized on the often-salacious accounts of captivity and rescue.

Once newspapers got going in Australia and New Zealand, says Bentley, “they retold these stories over and over again”.

Ramping up the drama was useful. Exaggerated tales of torture served the purposes of British and colonial officials, their military forces and land-hungry settlers.

Church missions were often forced to rely on explicit accounts of so-called barbarity to ensure ongoing funding. For those who had been enslaved, especially those forcibly tattooed, recounting their experiences provided a livelihood otherwise denied them.

As Bentley says, it was difficult to live with tā moko in Victorian society. “They were considered white savages, who had slipped down the scale of civilisation.”

Bentley’s book does not hold back on the sort of details written to terrify or titillate a 19th-century reading public. In telling Guard’s story, he quotes extracts from the 1834 journal of Alligator crew member Lieutenant Clarke, including accounts of Māori licking the blood from her wounds and attempting “to made an incision in her neck with a piece of hoop iron in order to drink her blood”.

Many of the reprinted images seem to be aimed at whipping up horror; even the red sticker on the cover, warning of content “that may offend some readers”, can be read as an attempt to ratchet up the shock factor. Bentley says this was done in the wake of the Christchurch mosque shootings, “when everyone was obsessed with hate speech and offending each other”.

The purpose of Bentley’s book, however, is not to entertain or to shock. Rather, he says, it is to provide a counter-narrative “that challenges the entrenched myth of Europeans as sole oppressors and exploiters in 19th-century New Zealand while reminding us that slavery is a human problem, not a race problem”.

In revealing the extent of white slavery in New Zealand, and exposing a period when Māori had power and Pākehā were powerless, Bentley sets out to cast light on a part of our history that does not fit into “the general theme of European conquest, colonisation and exploitation that is central to postcolonial writing”.

But Davis’ comments that “white slavery had been minimised or ignored because academics preferred to treat Europeans as evil colonialists rather than as victims” have proved controversial. In this book, the lack of macrons, unfortunate references to “Pakeha roastees” and “Maori gourmands”, even his mention of “Negroes” – in the context of the times, he hastens to explain – may well prove equally contentious.

So, might there be some fightback, particularly from Māori academics? Bentley, who is working on an anthology of 20 first-hand accounts by 16 men and four women captured by Māori, says there could well be – after all, he says, it took 14 attempts to find a publisher for this book.

“But I’m looking forward to that. Criticism is good. That is how we move forward.”